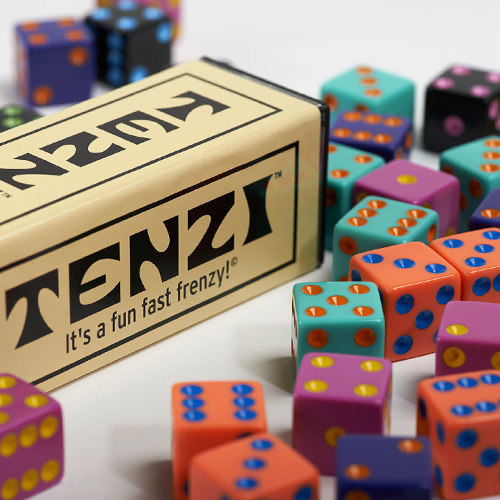 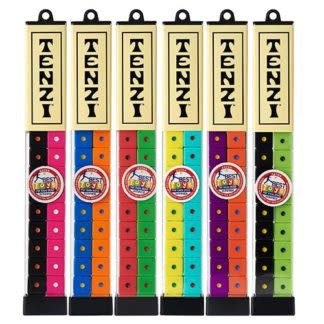 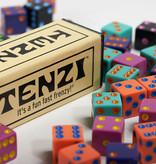 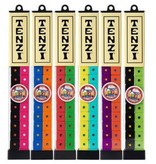 The world’s fastest game! Everyone gets ten dice. Someone says, “Go.” Then everyone rolls and rolls as fast as they can until someone gets all their dice on the same number and shouts “TENZI.” Lots of different ways to play. A fun fast frenzy for the whole family!

Be the first player to get all ten of your dice to show the same number.

(2-4 players.) Each player chooses a set of dice. Players hold all ten dice in their hands. Someone says “Go” and everyone rolls at the same time. Quickly look at your roll and decide which number you are going to go for. (For example, if you have more 3’s than any other number, that’s what you want to go for.) Put all your dice with that number aside, collect the remaining dice and quickly roll again. (You do not have to wait for others to roll again. Everyone rolls together only on the first roll.) Keep rolling until all ten of your dice show the same number.

The first player to get all ten of their dice to match (ten 3’s, for example) shouts out “TENZI” and wins the game!

The TENZI Story from the Inventors and Owners of TENZI:

Kevin and Steve hadn’t seen each other in years (they used to work together at the same small advertising agency), when they bumped into each other doing a little holiday shopping. “What are you up to these days?” asked Steve. “Thinking up board game ideas,” answered Kevin. “Sounds interesting. We should put our heads together and come up with something fun,” Steve replied, half-jokingly.

Well, Kevin wasn’t joking, not even halfway, so a few months later he handed Steve a bag of dice and said, “Let’s come up with a dice game.” Steve returned the following week and proclaimed, “Got it!” After Steve explained the oh-so-simple rules to TENSI (original spelling), Kevin asked dubiously, “That’s it?”

“Let’s just play,” said Steve, and play they did. Game after game, the dice rolled and the rules evolved. By the end of the day, TENSI had become TENZI, and Kevin and Steve were convinced they had a fun, fast, addictive new game on their hands. Now all they had to do was convince everybody else.

A week later, with a dozen TENZI prototypes in hand, Kevin and Steve walked into a local toy store to try to sell their game. “No thanks,” said the first toy store manager. “Not interested,” said the manager at the second toy store. But, luckily for Kevin and Steve, the manager at the third toy store (yes, Celeste, we’re talking about you) had a sunnier outlook. “If you can explain it to me in less than 30 seconds,” she said, “I might be interested.” Well, they could, and she was. In fact, she sold two TENZI games to a delighted customer before Kevin and Steve (also delighted) had even left the store!

Since then, TENZI has been on a fantastic roll. It’s grown from one single store to over 5,000 stores, from packing dice ourselves in the garage to… well, we’re still working out of the garage, but we’re no longer packing dice. (We just couldn’t keep up with all the orders, so now we have a great team helping us.)

Where TENZI goes from here, who knows? But it’s fun knowing where it all started. With a bag of dice and the simple goal, “Let’s come up with a dice game.”

Have a dice day!

Add your review
0 stars based on 0 reviews 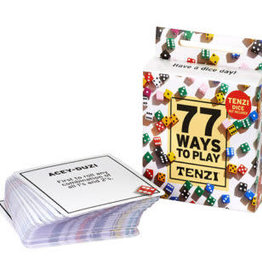 This deck of cards is a great add-on item to your TENZI game. It gives you 77 new and different ways to play TENZI. We’ve even included some blank cards so you can make your own TENZI variations. The TENZI frenzy rolls on and on and on!